- After login,  the loc engine wasn't started.  It is now
- Correctly update stats on user page (X/Y - slash was missing)
- Threading stat update - buttons grey out while stats update request is in process.
- Computer players were placing bombs to be disarmed - but they were not blowing up.  That limit has been turned off.-
- Duplicate players can't be created (based on e-mail)
Posted by Greg at 9:38 PM No comments:

Release Alpha .3
- Reverse Geo-code working. Should put something helpful for "Location Name" on place bomb
- Convert toast when bomb explode seconds to time (+ warning if level 10+)
- Clicking on the near tab will force a refresh of near list
- Showing location name in near list
- Fixed Injured stats for user
- Add cached update of exploded bombs, for Google Maps - Updates every 6 hours
- Keep track of if a bomb blows or is disarmed, and if blown what kill/injury it did.
- On Google map, diff icons for blown vs disarmed (and give stats for both)
Posted by Greg at 8:01 PM No comments:

Been working on leveling a bit. The below is the current leveling points, by level. I want the first few levels to be very easy, then it needs to get harder. I want to tie this to if the player correctly places stats, they can keep just behind or at the level point daily. 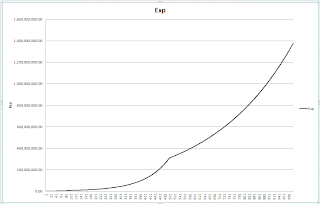 http://www.phonebomber.com now contains some Google maps.  I wrote something last night to generate KML for active and inactive bombs. 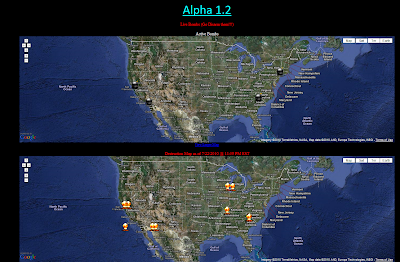 The inactive bombs (because of the number) will be generated nightly.  The Active Bombs are live bombs - as soon as a user places one, if they go to the web page they'll see it placed.
Posted by Greg at 2:39 AM No comments:

Making great progress!  The trip to Michigan was ok, but I (while developing in the emulator) had only been doing real GPS, not "Coarse" (e.g., cell phone tower triangulation, know wifi-location, etc) so it was only working outside with a clear view. Both Paul and I played, but it was limited

Last weekend I ripped apart the GPS code.  Now doing whatever GPS the phone can get at any given time. Each activity that needed GPS was doing it's own GPS notification logic.  Changed it so only the main activity is getting location, and the rest feed off of that.

Also got mapping working.  Now that it's up, I realized I needed a screen to show all the USERS bomb, regardless of location (both in a list and on a map).  Maybe show both current and exploded bombs. Good way to keep track of the mayhem you've been up to :)

- GPS Fix - now doing both real GPS and triangulation
- GPS Overhead reduction (only one Activity does GPS)
- When app is hidden (not on top, or phone suspended), it won't ask for GPS updates (no battery burn)
- Defuse now will update list of near bombs screen, if a bomb is disarmed or it blows up.
- Stamina updated on Disarm screen
- Level screen now dialog (and only shows once)
- Increased size of + buttons on user screen (for leveling)
- Disarming now costs, in stamina, the level of the bomb
- Placing a bomb will give exp that is equal to the level of the bomb
- You must now be within 1000 meters to disarm a bomb
- If your level is below the bombs level, increased chance of the bomb randomly exploding
- Reduce chance of creating computer player (and placing a bomb) - was every time but now 1 in 10
- If a computer player is created, only ONE will spawn (and will place one bomb)
- On computer player spawn, will re-use any computer players around you.
- On Users screen, plus's bigger, with some space between them.
- Maps work!
Posted by Greg at 9:30 PM No comments:

Some more milestones hit tonight.  The GF came over for dinner and played a bit.  She was the first non-dev to: place a bomb, disarm a bomb, get blown up by a bomb (both on a disarm and one I had placed earlier in the day), and the first non dev death.  Way to go, B!!!

I also, for the first time, took the Nexus One out and around to play. Worked GREAT - placed some at Startbucks, and Target (while B shopped).  Placed some bombs, and created a new account and played (blew up on a disarm of a high level bomb).

Have some issues when no connection is available - need to add some null checks on middle-tier data returns of NULL.
Posted by Greg at 9:45 PM No comments:

These are from the real cell phone (Nexus One).  I'm pretty happy with the top status bar - updates whenever you do anything (from server). I changed the Exp from current/total to a % (as that will fit, as the user levels the total will be a large number).  The 1027/50 is the stamina - and is wrong because I edited the user on the server to give them a lot of stamina (as I was testing).


Leveling is working, but for some reason the user is going to 87% of level when they level (d'oh!).  I also have to work on game balance - how quickly a player will normally level (total exp, exp doing stuff, and stamina). 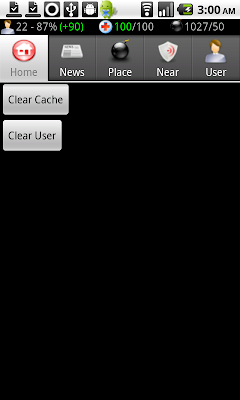 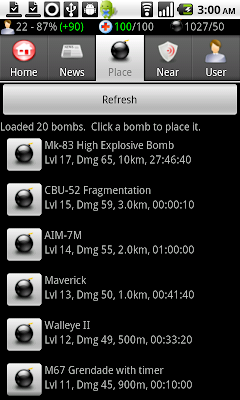 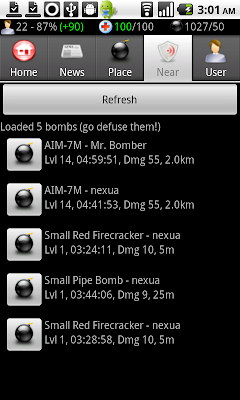 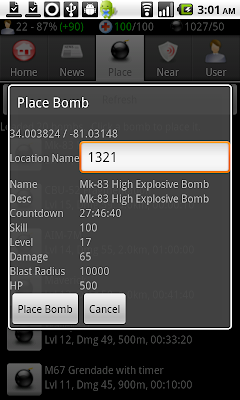 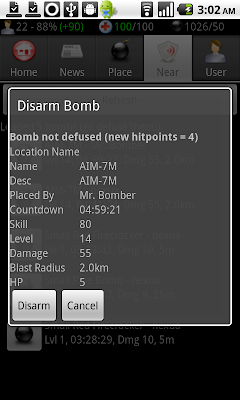 So finally bought a Nexus One. Right now I've got a AT&T data only card - $19 for 100 MB. Using Wireless during dev, but this will let me get out and around and use the game. The AT&T guys were initially boggling over what I wanted (pre-paid SIM, data only, no minutes, no phone number). LOL.

I have also ordered a MicroSIM to SIM adapter, so I can also switch over my normal plan from my iPhone to the Nexus, if I need more than what I've got.

Debugging on the Nexus is GREAT! I've done cell phone dev in the distant past (MS's stuff), and it was a pain.

The interface is starting to look solid - actually GOOD in areas. Still need to do the home page and the user page (stats, handling leveling up, et al). It took me about 2 hours to go from Emulator-only to working on the real phone 100%. Most of it was buttons where I'd set the height instead of wrap_content. I think this was causing androids auto-resolution to mess up (as the nexus is a different res then I was developing against).

I'm heading to Michigan next week for vacation. Will take the Nexus along and place bombs as I go :)
Posted by Greg at 12:02 AM No comments: